In conversation with two winners of the Fentress Architects Airport Of The Future Global Student Design Competition 2020. Nikhil Bang and Dušan Sekulić gave us enthusing insight into their award-winning visionary concepts for how airports will exist in the year 2100.

According to Fiona Greer in an article for Environmental Research Letters, the aviation industry accounted for approximately 2.5% of global greenhouse gas emissions in 2018 with 85% from aircraft emissions and 15% from airport emissions. To put this in perspective, The Environmental and Energy Study Institute considered the aviation industry as its own country, showing how it would rank sixth most polluting country in the world. With the increasing ambition to make sustainable and environmental change through movements such as the UN’s Sustainable Development Goals, Biden’s new Climate Policies and Extinction Rebellion, the development of the aviation industry must be a crucial priority in order to achieve these goals.

Airports of today are purely one-dimensional, serving their principal function and not much more. Dušan Sekulić describes them as ‘isolated islands’ proposing through his work that airports will become integral and functional parts of the infrastructure in 2100.

One of the greatest progressions in Dušan’s concept is the idea of Sky Cruiser flights made up of flocks of Pods. A Pod can be defined as a fully autonomous, self-driving, electric device that is able to move both people and cargo. The Pods would self-drive, or even fly, passengers into the airport, being sorted into these flocks depending on destination, then driving directly into the aircraft. All being fuelled using energy deriving from the Pods themselves. This would mean passengers could get from point A to B in one seating, sharing and saving energy too, essentially treating the airport as a junction. These Pods drive on bridges connecting every aspect of the airport to ensure “an effortless bridge between land and air” as Dušan says, it’s vital for transportation to be fluid “Flow of people and cargo is the most important aspect of airport design today.” 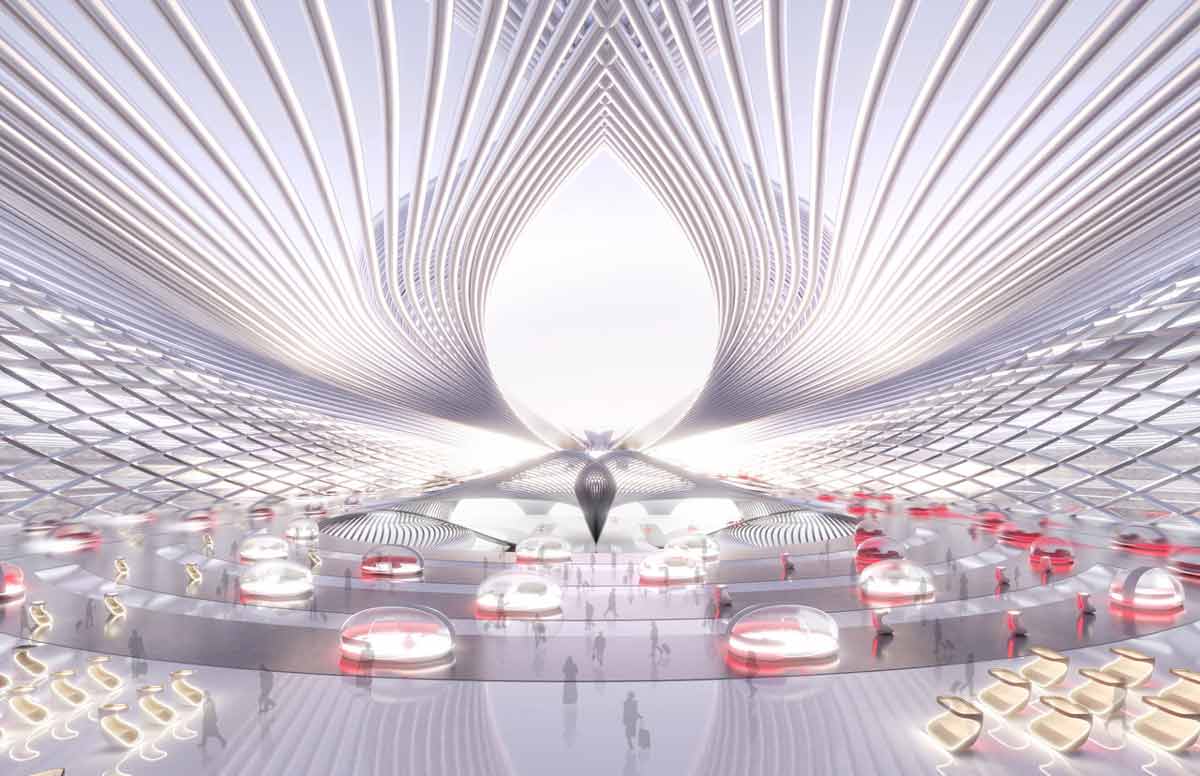 Scattered around the city of Atlanta in 2100 will be Driving Chair capsules, picking up individuals and dropping them to the next place. This transportation method is aimed at relieving the traffic congestion problem currently faced in Atlanta. The Driving Chairs, as well as Pods, are calculated using powerful AI computer navigation which optimises energy consumption and time efficiency. Eventually, Dušan explains, these Driving Chairs will even be able to directly board the aircraft automatically - further simplifying the flying process. 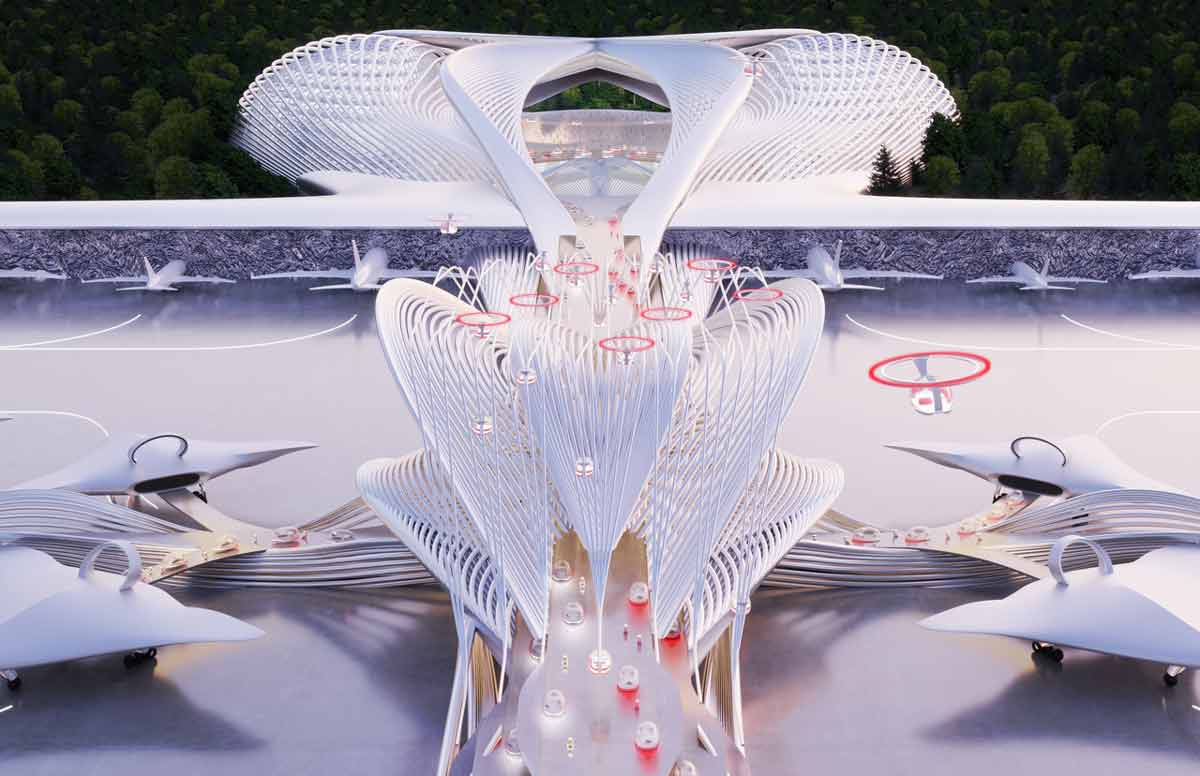 With the continuous exponential growth in technology, innovations such as flying pods and driving chairs are not as distant as we may think. Vertical Take Off and Landing (VTOL) aircraft, or drones as they are more commonly known, use a lot of energy to operate so up until the recent advancements in battery storage they have not been very feasible. Dušan says “With optimisation in the electrical energy storage department it almost seemed like over-night a whole new field of technical inventions appeared.” In fact, VTOL aircraft are already showing potential today according to Dušan, VTOL will act as one of the main types of air travel in the Drive-in Airport.

Dušan’s Drive-In Airport 2100 reflects Atlanta’s nickname of ‘city in the forest’ as it seamlessly merges with the green city skyline, becoming ‘airport in the forest.’ With the airport being surrounded by greenery Dušan reminds us “There is no number of trees and green facades you can put on a facade for excusing unneeded energy consumption.” He expresses how designs can only ever be as sustainable as their overall energy consumption from build to use.

“Greenwashing could be the most honest way of explaining the misconception that we have happening today throughout industries and architecture and design are not exceptions.” - Dušan 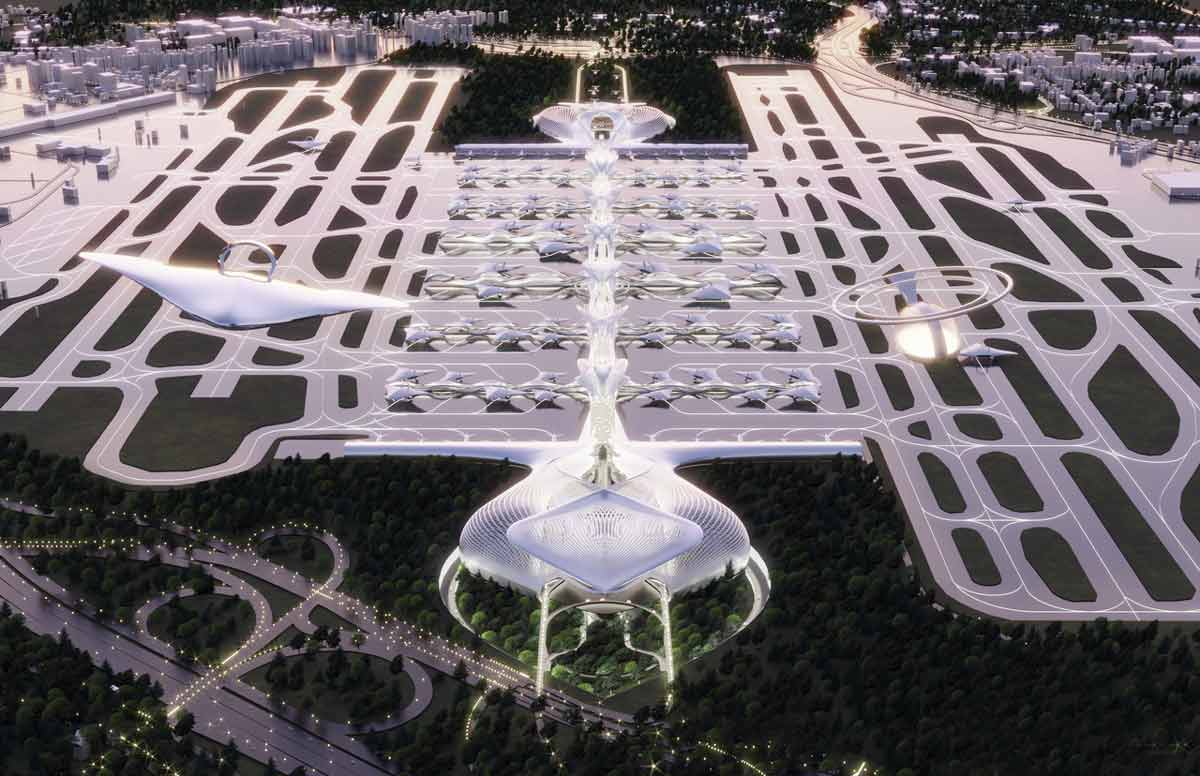 In similar regard to the Drive-in airport, Nikhil believes airports of the future must act as more than just an airport “airports are not looked at as physical objects of existence but evolving with time and keeping in connection with the cultural context of the city.” 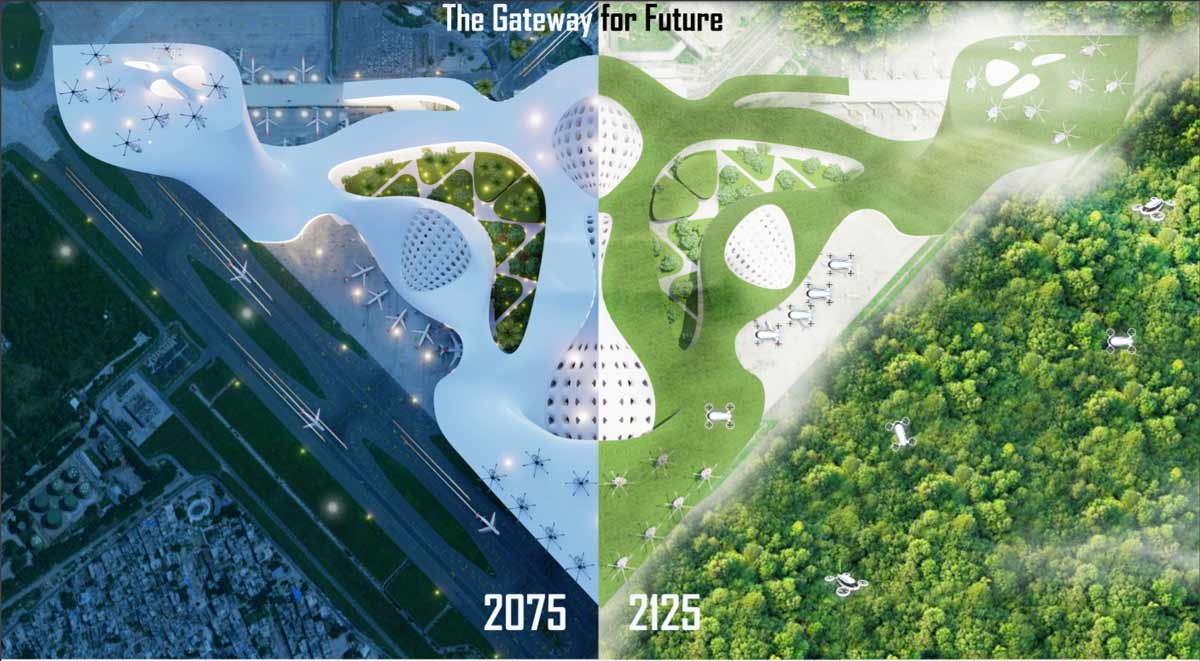 Nikihil’s Green Gateway Airport 2100 is zero-carbon-emission at both the macro and micro level. It is a reimagination of the Indira Ghandi Airport in India, where pollution is an immense issue. The Green Gateway is a flying park-and-ride centre for flying cars. Instead of the conventional approach to airport design, the Green Gateway has a decentralised system consisting of one terminal and six towers across the city. The towers are stations for the flying cars, helping mobility throughout the city by replacing domestic flights – one of the major sources of pollution in the city. Furthermore, they simultaneously work as air-purifying centres. 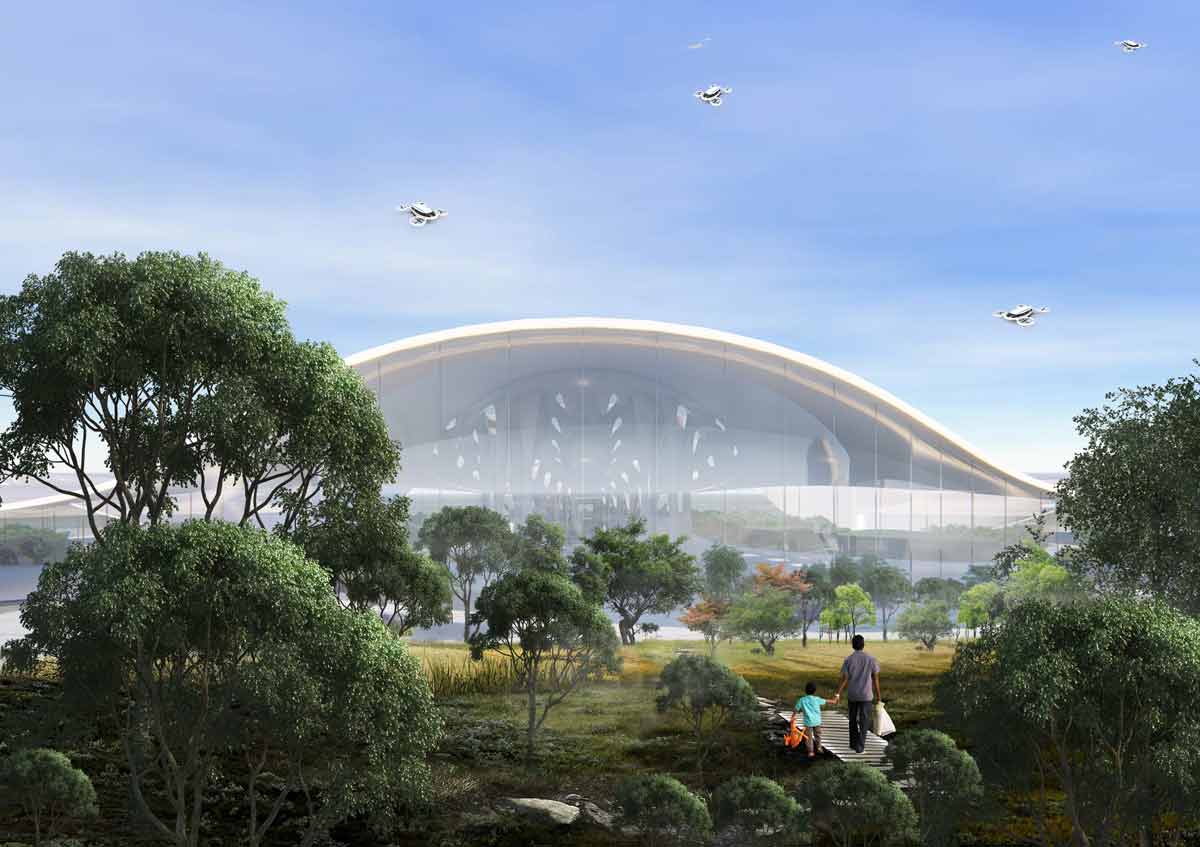 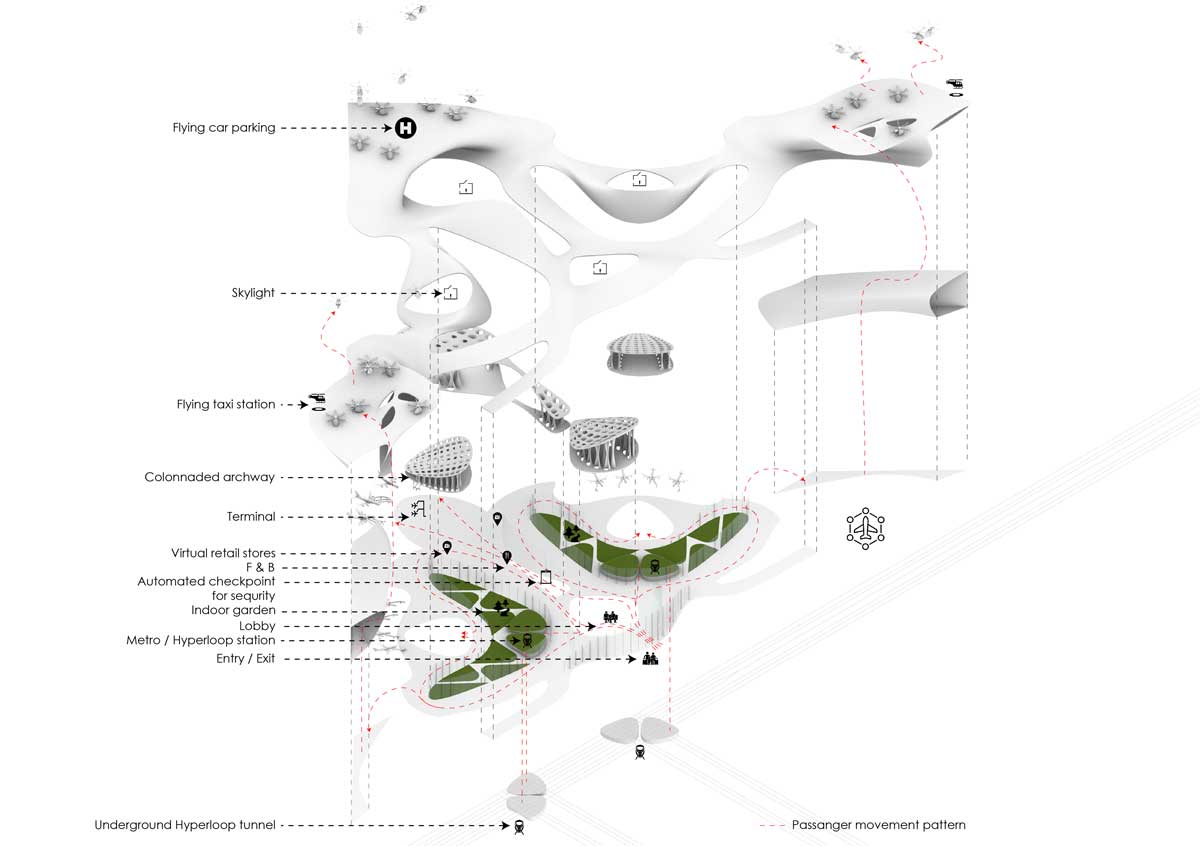 The coronavirus pandemic we are currently living through is a supreme example of the climates we must prepare for when inventing and designing for the future. Nikhil explains how The Green Gateway has “the ability to operate in situations like pandemic where the structural columns will be used as a medium for flying capsule cars to avoid mass gathering and maintain social distancing to travel from one part to the other.”

"This proposal is a device, a thought experiment where airports are not looked at as physical objects of existence but evolving with time and keeping in connection with the cultural context of the city" - Nikhil

With overpopulation as a rising concern and sustainability a paramount determinant, city design encompassing transportation, infrastructure and architecture must be multi-functional and actively regenerating and maintaining the city. Looking into the future is a fine way to analyse where the world is currently at with issues of sustainability so goals and targets can be set to ensure a real positive impact is made. It is inspiring to hear of such futuristic concepts and ideas from young industry professionals. The future of city design is prosperous and the emphasis on environmental sustainability is promising.
We’re excited, see you in 2100! 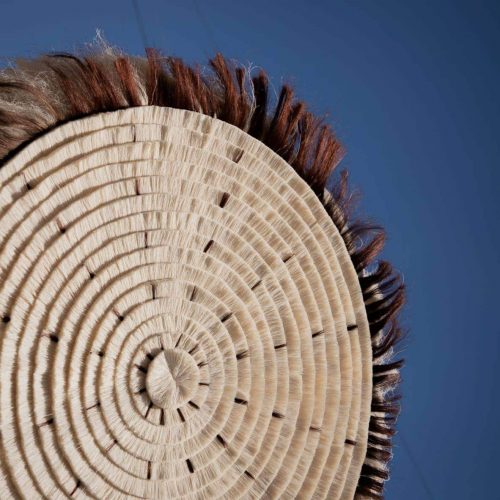 Caralarga | The Mexican Inspiration Behind Sustainable Pieces For Home 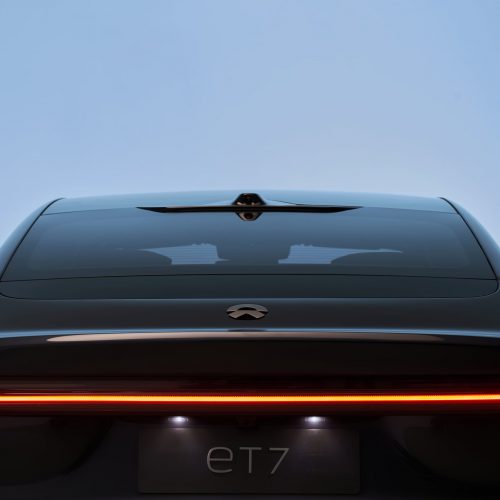 NIO | The Glamourous Sustainable Electric Car You Can Have By Subscription 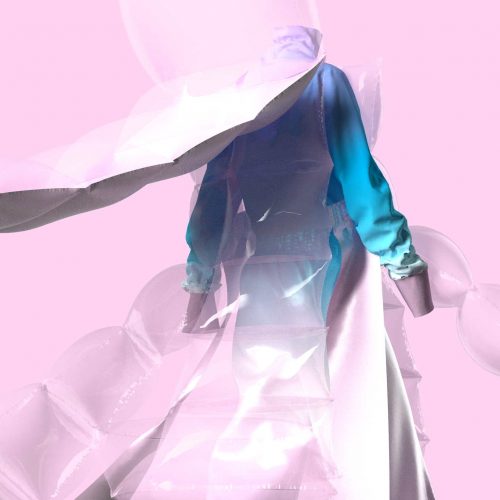 The Benefits And Pitfalls Of Digital Fashion | Interview With Diane Wallinger